You are here: Home1 / Callerts History

The company was founded in 1935 by the two brothers Henry and David Callert at Fiskargatan 9, Mosebacke, Södermalm in Stockholm, Sweden. Henry Callert had been in America and had practiced dry-cleaning and dyeing. The business started originally with chemical washing and dyeing.

During the war, much of the activity consisted of washing for the Swedish defense and Svea Life Guards. After the war Henry Callert alone continued to run the company. Some prominent costumers from the time were the Royal Theatre (Opera House) and Skansen´s Wardrobe.

This cooperation continued until the late 80’s. Business then changed to focus more on the carpets, mostly oriental rugs, tapestries and crafts. After Henry Callert passed away in 1980, at a age of 76, his son Carl Erik Callert took over the family company. In the mid-80´s the third generation, began to work at Callerts Rug Cleaning., his name was Michael Wahlberg.

The business started to grow so much that the historic premises on Fiskargatan 9 became too cramped. In 1998 Callerts Rug Cleaning acquired a property in Nacka at Värmdövägen 748, and it was to become an ultra-modern cleaning facility for carpets with a special focus on antique rugs, oriental rugs and fabrics.

When Carl Erik Callert retired, Michael Wahlberg began to run the company. Today Callerts Rug Cleaning, also known as “Callerts”, is known among carpet traders, auction houses and rug interested people not only in Sweden but at an international level.

The extensive customer base is now not only customers from Sweden but also from Ireland, the US, Great Britain and countries in Scandinavia.

Please take a look at the movie of Callerts from the 1940’s.

Callerts
are Purveyor to the Royal Court of Sweden 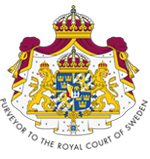 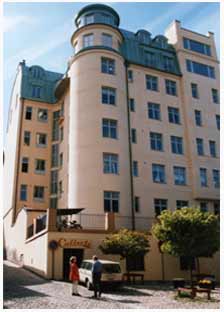